Create an Account - Increase your productivity, customize your experience, and engage in information you care about.

The One Gas Inc. (ONE Gas), formerly known as ONEOK, Inc., Former Manufactured Gas Plant (FMGP), Site (Site) is located southeast of the intersection of Mill and Republican Streets, Concordia, Kansas (approximately 1,000 feet south of Lost Creek and a mile south of the Republican River (Figure 1). The earliest record of deeds citation notes that the Concordia Gas Company took title to the proper 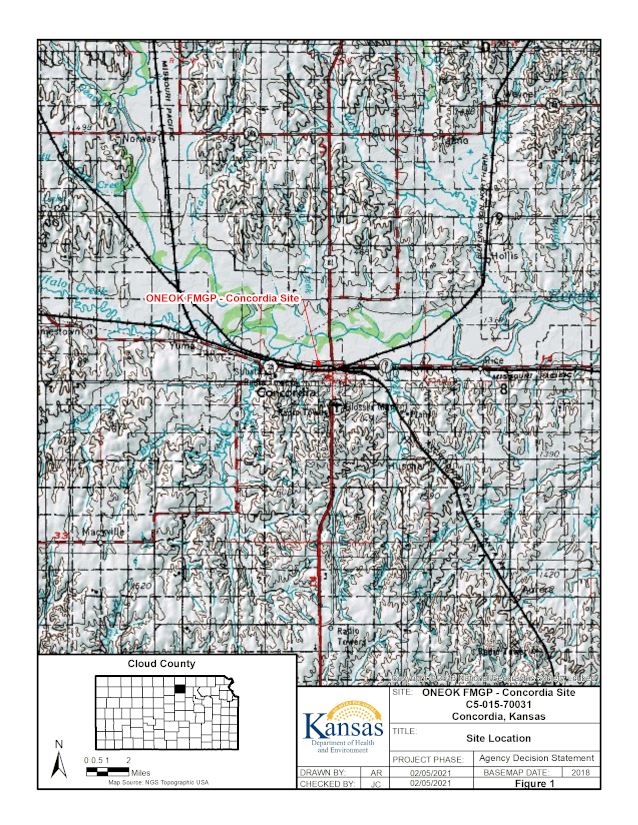 ty in 1915. Manufactured Gas operations ceased in or around 1930 when the Gas Corporation of Concordia was acquired by the Kansas Pipe Line and Gas Company. The property is currently zoned as Light Industrial and is now owned by the Abram Ready Mix Plant. No buildings associated with the FMGP operations remain.

The properties to the east of the Site were used by the following facilities:

On behalf of the United States Environmental Protection Agency (USEPA), a consultant/contractor investigated the Site and recorded the results in the Site Investigation Report for Site Assessment Activity at Concordia FMGP (January 1993). The sample results identified heavy metals, semi-volatile organic compounds (SVOC), and volatile organic compounds (VOC) were located in the subsurface soil and groundwater. Elevated levels of zinc and mercury and six SVOCs were detected in the subsurface soil above background levels. Laboratory results also identified eight dissolved metals, five SVOCs, and 22 VOCs above background levels or above maximum contaminant levels (MCLs) in groundwater samples.

Five groundwater monitoring wells (CMW-01 to CMW-05) were installed between June 5, 2007, and August 29, 2007. These monitoring wells primarily line the perimeter of the Site. These wells have been routinely sampled beginning in 2007 through the most recent groundwater sampling in August 2020. The only analytical constituent that has been consistently detected above KDHE Residential or Non-Residential Tier II RSKs values is arsenic (0.01 milligrams per liter (mg/L)). Arsenic has been detected at concentrations ranging from 0.011 mg/L in the sample collected from CMW-02 to 0.049 mg/L in the sample collected from CMW-05 during the August 27, 2020 event.

In 2008 ONE Gas completed an Interim Removal Action (IRA). The IRA excavated approximately 1,604 tons of soil, ending when groundwater was encountered at 23 feet below the ground surface. The excavation was lined with a geotextile barrier and backfilled/compacted with clean fill. The surface was graded with six inches of crushed rock to match the existing grade. Confirmation sampling indicates that the IRA successfully removed most of the soil impacted above RSK Tier 2 levels. Existing building foundations and concrete slabs prevented the complete removal of the contaminated soil.

To prevent possible future exposure to soil and groundwater contamination ONE-Gas recorded an Environmental Use Control Agreement (EUCA) (08-EUC-0038) on December 1, 2009, with the Cloud County Register of Deeds, restricting future land use to non-residential and prohibiting drilling, construction, or use of water wells for domestic purposes.

The remedial alternative identified in the Final ADS (September 6, 2019) was Alternative 2 - long-term groundwater monitoring which included all previously completed excavation, response actions, and the Environmental Use Control (recorded with the Cloud County Register of Deeds. This remedy has proven to be protective of human health and the environment. Therefore, on the basis of the Administrative File summarized above, KDHE recommends that the Site be Conditionally Closed in accordance with KDHE Bureau of Environmental Remediation (BER) Policy, BER-RS-024, Site Closure in the State Cooperative Program, (February 2015).

The ADS was available for review from April 5, 2021, through April 20, 2021, during the 15-day comment period held to solicit written comments from the public. Any comments received will be addressed in the final ADS.