Create an Account - Increase your productivity, customize your experience, and engage in information you care about.

In June 2012 a homeowner in the Quail Crossing neighborhood in Andover, Kansas, reported a strong petroleum odor from his irrigation well while performing routine maintenance. The homeowner contacted NuStar Pipeline Operating Company, LLC (NuStar), who operates a petroleum transportation pipeline that passes approximately 50 feet from the home, located in Colt Court. KDHE received notification of the problem and was present when NuStar representatives confirmed the presence of petroleum products in the well. Analysis of a sample collected from the well showed detections of total petroleum hydrocarbons and volatile organic compounds at levels above the federal maximum contaminant levels (MCLs) for drinking water and KDHE's Tier 2 Levels for groundwater. Six other nearby irrigation wells were checked with field equipment, and no signs of impact were observed in those wells. NuStar had the sprinkler system for the impacted well connected to the Andover public water supply. 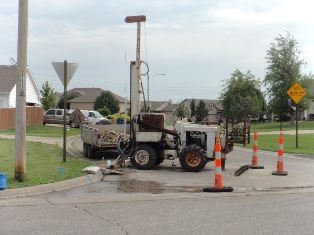 NuStar conducted tests and identified a leak in a section of the pipeline located beneath West Mountain, adjacent to the property of the impacted irrigation well. In July 2012 significant soil impact in a 50-foot section was discovered, and approximately 16 cubic yards of impacted soil was excavated when the pipeline was repaired. Sample results show that soil and groundwater adjacent to the pipeline have been impacted.

Product recovery from the impacted irrigation well continued on a periodic basis during negotiations between the KDHE and NuStar for a Consent Agreement and Final Order. Over 230 gallons of petroleum product were recovered as of October 2013.

After the Consent Agreement and Final Order was executed in May 2013, NuStar began investigating the extent of petroleum contamination in soil and groundwater. The first phase of the work was conducted in July 2013 with expanded efforts continuing into October 2013 to delineate the area of contamination. 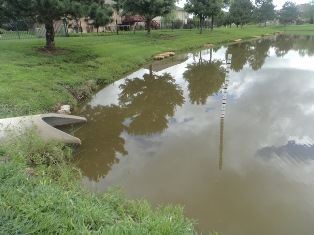 The lake, located to the south of the contamination, was evaluated for impacts from the pipeline leak. A gauge was installed to study the relationship between the lake and the groundwater. Information gathered has shown that the lake is a "losing" lake, which means groundwater is not flowing into it, but rather, the lake is pushing the groundwater in the northeasterly direction. To date, data show that the impacted groundwater is moving away from the lake.

Irrigation wells have been sampled in the vicinity and additional wells are continuing to be sampled. To date, irrigation wells that have shown detections of contaminants are located in Colt Court, West Mountain (near the area where the leak occurred), and Ruger Circle. With the permission of the well owners, all sprinkler systems connected to impacted wells and other wells nearby were connected to the public water supply.

In October 2013, 16 monitoring wells and 15 irrigation wells in the area of the investigation were sampled. The results were compiled and evaluated in the Comprehensive Investigation Report (PDF). A pilot test to evaluate a clean-up alternative (soil vapor extraction) was conducted in November 2013. Additional soil testing was conducted in April 2014 to help evaluate the best approaches to address residual soil contamination. NuStar also performed pilot testing to evaluate in-situ groundwater remediation in spring 2015. Tests to evaluate the potential for vapors to enter homes were initiated in December 2013. Additional excavation activities were completed in October 2015 to remove additional soils in the release area. Results are documented in the March 2016 Soil Excavation Results Report (PDF).

Two groundwater pilot tests have been conducted to evaluate groundwater remedial technology for treating the impacted groundwater. The initial phase of the pilot test was performed from March through June 2015. Three additional monitoring wells (MW-17, MW-18, and MW-19) were installed and an oxygen release compound (ORC) was injected through nine temporary injection borings. Positive results from this injection test prompted a follow-up expanded groundwater pilot test from July 2016 through September 2017. The expanded pilot test included the introduction of a more concentrated pelletized form of ORC Advanced and the installation of a larger number of injection borings to address residual dissolved-phase petroleum constituents in groundwater.

Ongoing input and involvement by citizens is essential to KDHE's efforts to provide effective community engagement. Community members need to be involved in all phases of the investigation and remediation process so that contamination is addressed in a way that protects people and the environment - now and in the future. KDHE has developed a Community Involvement Plan (PDF) to encourage community involvement in site activities.

On August 29, 2013, and February 17, 2014, residents attended neighborhood meetings where KDHE and NuStar provided investigation results, discussed the next steps for investigation and cleanup, and listened to community concerns.

KDHE held a public meeting on June 12, 2019, at the Andover Public Library to present KDHE's draft Corrective Action Decision, which presented the preferred remedy, and to solicit public participation. KDHE selected a final remedy after reviewing and considering all information submitted during the 30-day public comment period held May 20, 2019, through June 20, 2019. The Final Corrective Action Decision (PDF) was signed by the KDHE Secretary on July 20, 2019.

Homeowners in the Quail Crossing neighborhood use private wells for irrigation purposes. NuStar has connected sprinkler systems to the municipal water supply for residences whose wells show impact from the contamination as well as residences with unimpacted wells that might affect the migration of the contamination when in use. Irrigation wells may be sampled periodically to assist in evaluating changes in the impacted groundwater.

KDHE issued the Final Corrective Action Decision (PDF) with the selection of the preferred remedy of enhanced aerobic bioremediation via injection of ORC. NuStar submitted the Corrective Action Plan outlining how the preferred remedy will be implemented, and it was approved by KDHE on October 4, 2019. The plan was initiated in late October 2019 and drilling activities for the injections were completed in December 2019. Groundwater continues to be sampled quarterly to assess the effectiveness of ongoing in-situ groundwater treatment and to monitor contamination.